AMF can parse AML dialects and the following API specifications:

The following section explains the basics of parsing, and the example shows how to parse each specification in Java or JavaScript.

Parsing is the process of analyzing a sequence of tokens and then building a data structure from them.

AMF uses SYAML to read a JSON or YAML file and generates an abstract syntax tree (AST) from the file, which is later used to generate a graph that represents the model. The model can be either a Web API model (representing an API, independent of its specification), or an AML document model (a dialect, vocabulary, or dialect instance).

Parsing returns a BaseUnit object, which is a graph of the model. Depending on the content in the parsed file, the BaseUnit object can be a Fragment, a Module, a Document or another type. 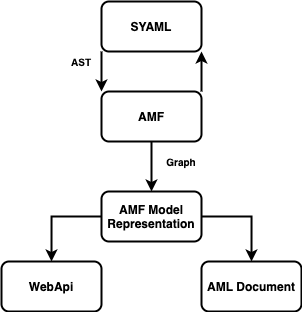 The file paths you give the parser must have the following structure:

Also, before parsing an AML dialect instance, you must register the dialect using the AMF.registerDialect() function.